The Dodge Dart Swinger burst onto the American muscle car scene in 1969 two years after the initial production of the fourth generation Dart in 1967.

In the late 60s The Dodge Boys “White Hat Specials” were developed as part of the marketing for Dodge vehicles.  Their goal with the Swinger was to target American consumers on a budget.  The advertising campaign for this mini muscle car was “Clocking in at 6,000 RPM for under $3,000.”  Unlike auto advertising of today, that price actually covered more than just the base model and included the straight six all the way up to the to a 383 magnum motor.

However what most enthusiasts believe to be the real performance model was the 1969 Dodge Dart Swinger 340 package.  Priced at $2,836 this included the 340 small black V8 which put out 275 horsepower at 5,000 RPM.  Although this was less than the bigger 383 motor, the 340 model made up for it by weighing 90 pounds less.  Add to this a heavy duty Rallye suspension, firm ride shocks and dual chrome tipped exhaust; the Swinger 340 was perfectly balanced small muscle car.   Rounding out the performance was a 4-speed Hurst shifter, pulling a set of 3.23 gears for full control.

Bumblebee stripe tagged it as a Junior member of Dodge’s elite Scat Pack which included the Super Bee and Charger.  It could run with the big boys knocking out quarter mile times in the mid 14s and hit 60 in just 6 seconds.

The Swinger 340 only came in a two door coupe, with options such as a black vinyl roof and exclusive bright red paint color.  Sheet metal was the same as 1968 darts with small changes to the grille and taillights.  The inside of the 340 was straight forward with standard bench seats and spacious rear seating.  Although considered a compact at the time, today it would be closer to a full size.

Car Life rated the Swinger the best compact of 1969.  Its main competitor was the Chevy Nova SS which was priced at $300 more for comparable features and driving performance.  Of all the muscle cars from 1969, the Swinger 340 was by far the best value.  On top of this since it was less than 3,100 pounds it did not fall into the muscle car range for insurance companies, meaning lower premiums.  This combination led to immense popularity with 16,637 produced.

Other 1969 models included the cheapest 2-door hardtop which replaced the two-door sedan of 1968.  (This was also sold as the Plymouth Scamp)  Other hardtop models were the Custom, GT and GTS which featured a hefty 440 Big Block V8.

The 1970 model year marks many changes for the Swinger; it is also the most searched year online.  Not only was the Swinger redesigned in order to differentiate it from other Dodge vehicles such as the challenger, it was also modified to comply with new safety standards.  This included side marker lights and reflectors along with a federally mandated steering column and ignition lock.

The Swinger was the model trim used for all two door hardtops in 1970 except the high end Custom.  The performance model continued to be the Swinger 340 two-door hardtop especially after the Dart convertible and 383 engine was discontinued. 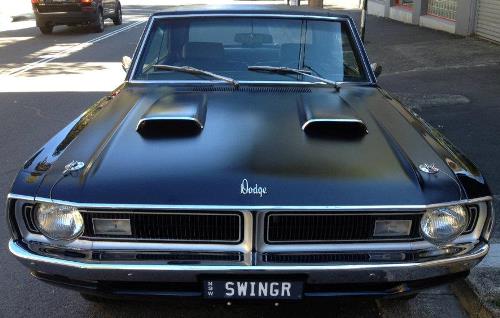 The 1971 model marked another landmark change for the Dart.  This included several Plymouth Valiant rebadged versions along with the Custom 2-door hardtop Dart coupe becoming the Swinger, and the standard 1970 Swinger becoming the Swinger Special.  One of the rebadged Plymouth’s was the Duster which was called the Dart Demon.  The Demon name was also used to replace the popular Swinger 340 as the Dodge Demon 340.

The changes to the Dodge Dart Swinger through the remainder of the production were mainly minor cosmetic alterations and modifications to stay inline with increasing federal and state safety regulations.  This included much larger bumpers and side-impact guard beams in the doors which made the Swinger look more like a Sedan than a muscle car.  Other major changes were new emission control devices that impacted performance and cost.  There were still high end versions of the Dart including the Demon Sizzler, fastback Dart Sport and Special Edition.  Waning sales caused the Dodge Dart lineup to be discontinued after the 1976 model year.

Have anything else to add?  Let us know in the comment sections below.

Use the search box above if you are looking for a specific type of Dodge Dart Swinger or anything else unique. You can also use the search functionality to browse by specific locations.

If you want to browse by vehicle features such as engine, transmission or body style, use the links below. You can select by model year as or see ads filtered by major locations.